Grills and BBQs Heat Up for Summer

Summer is the season of swimming, baseball and backyard barbecues (the 4th of July, Memorial Day, Labor Day and Father’s Day are the most popular days for grilling.) The Look East home office is located in Kansas City, home of world championship baseball and host of the world’s largest barbecue competition, the World Series of Barbecue, so we know summer activities, and we especially know barbecue.

When I went to college my fraternity had a grill lit and hamburger patties out every Friday night, and you were on your own to cook for yourself, so I learned quickly after a few burgers so rare they practically mooed. From that point on, though, grilling became critical to my ability to feed myself and certainly the only food I could prepare well enough to serve to others. I’ve also had a smoker for about a year and a half, and barbecuing has become my new hobby. (No, I would not call it an obsession, why do you ask?)

So even if you are currently a novice, you can still learn how to be a grill or pit master, with some of these tips.

First, keep it safe and make sure you cook the meat to the proper internal temperature. Use a meat thermometer and this guide from Best Food Facts to determine the proper temperature for beef, pork, chicken and more.

Next, you’ll need to determine what type of grill or smoker you are using and select the proper meat and cooking method. The Hearth, Patio & Barbecue Association conducts a Barbecue Lifestyle, Usage & Attitude Study every two years, which showed 80 percent of households own an outdoor barbecue, grill or smoker. Sixty-one percent of households that own a grill have a gas grill, followed by charcoal (41 percent) and electric (10 percent), with some homes owning more than one type of grill. The HPBA 2014 study showed hot dogs as the most popular meat cooked on a grill at 72 percent, followed by steak (71 percent), burgers (69 percent) and chicken (64 percent.)

I like to grill burgers, brats, pork chops, hot dogs and steaks, with bacon-wrapped filets being my favorite. There’s no shortage of rubs and marinades you can use. I’m partial to a Steakhouse or Steak and Chops marinade (there are several brands that have this type of marinade) or a brisket rub for hamburgers. (Let the burgers sit in the marinade in the refrigerator a few hours before you put them on the grill, or mix the rub up in the patties when you make them.) 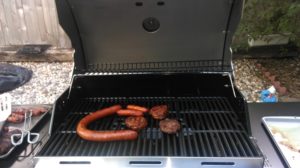 Resist the urge to flatten burgers with a spatula, as that will squeeze out juices and does not help them cook faster. Also, meat will continue cooking for about 10 minutes after you remove it from the grill (it’s called carryover cooking), so factor this into your temperatures to get an accurate account of doneness. It’s also important to let steaks rest for about 5 minutes so the juices will redistribute throughout the meat and be reabsorbed.

My favorite pork chops have a pineapple dry rub, but you could also find cherry and apple rubs that are tasty too. You can brush on a thin layer of yellow mustard to help the rub stick to the meat better. 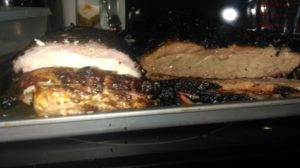 For other meats, like ribs, pork shoulders or butts, brisket or salmon, a smoker might be an option as well. Smoked foods were named a top food trend for 2015 by supermarket guru Phil Lempert, as well as the Barbecue Bible, and some of us think good barbecue never goes out of style. To learn more about the trend of smoked meats, seafood, cheeses, fruits and vegetables, check out this article in Best Food Facts. And just because you can add smoky flavor to the foods you love, doesn’t mean you’re sacrificing nutrition as Look East’s own registered dietitian Sarah Downs points out. 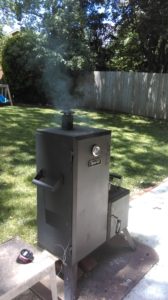 There’s all kinds of rubs, marinades and recipes for barbecue and you can find a number of links to those here. Also, you can use different types of wood and charcoal to get different flavors. I use hardwood lump charcoal and usually use oak wood chunks, though mixing in some cherry or apple can give you a sweeter flavor, and hickory can have a stronger smoky flavor. Cooking each meat to the proper internal temperature is vital as well. I have probes that hook up to a Bluetooth device that lets me check the temperature of the meat on the smoker from my phone at all times, but an instant read meat thermometer will work fine too. Opinions vary on using aluminum foil, brining or injecting marinades into some cuts of meat. I like that there is no one right way to barbecue, and you can experiment until you find what works for you. I’ve cooked ribs, pork loins, pulled pork, brisket, chicken, fresh ham and even a salmon and shrimp for Mother’s Day (and I’ve got a turkey in the freezer I’m anxious to try.) Results have varied. I’m not ready to hit the competition circuit, but my Look East co-workers tell me the break room smells good when I warm up leftovers.

Funstigators
June 13, 2016
We use cookies on our website to give you the most relevant experience by remembering your preferences and repeat visits. By clicking “Accept”, you consent to the use of ALL the cookies.
Cookie settingsACCEPT
Manage consent

This website uses cookies to improve your experience while you navigate through the website. Out of these, the cookies that are categorized as necessary are stored on your browser as they are essential for the working of basic functionalities of the website. We also use third-party cookies that help us analyze and understand how you use this website. These cookies will be stored in your browser only with your consent. You also have the option to opt-out of these cookies. But opting out of some of these cookies may affect your browsing experience.
Necessary Always Enabled

Any cookies that may not be particularly necessary for the website to function and is used specifically to collect user personal data via analytics, ads, other embedded contents are termed as non-necessary cookies. It is mandatory to procure user consent prior to running these cookies on your website.