The Center for Food Integrity set out over a decade ago to determine whether competence (facts and science) or confidence (shared values) carries more weight in building trust. More than 6,000 U.S. consumers were surveyed over the course of three years exploring questions related to animal care, food safety, environmental sustainability and other food and agriculture issues. 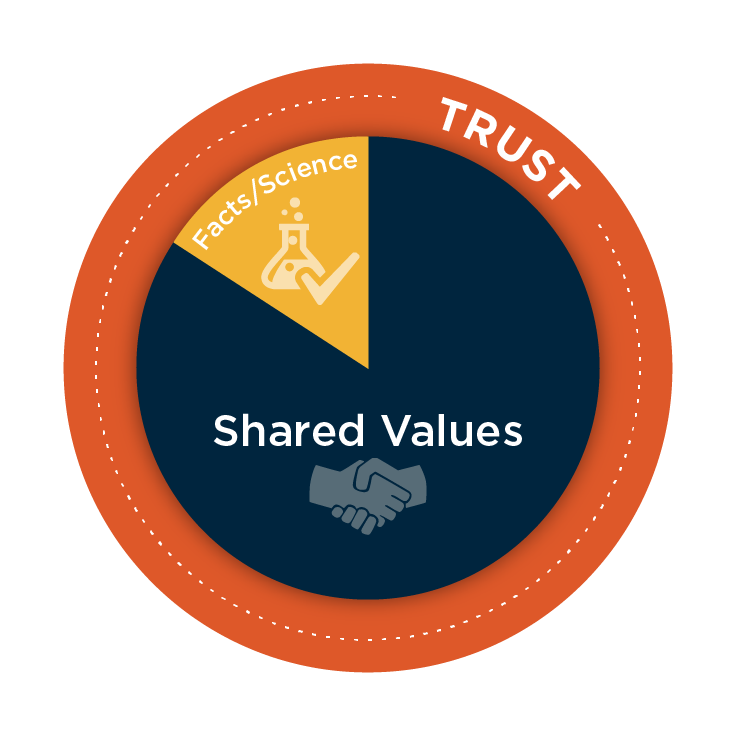 The peer-reviewed and published results showed that confidence (shared values) is three to five times more important than competence (science and facts) when it comes to building trust. Food and agriculture had it backwards for decades, historically leading with data and science and assuming it would satisfy an increasingly skeptical consuming public.

I didn’t buy it, at first. I thought the research had to be flawed. But, I was overlooking the obvious because I was so heavily vested in the belief that all decisions related to food and agriculture should be science-based. I came to realize that science tells us if we can do something, but society tells us if we should. People in food and agriculture are very skilled at answering the “can’” question, but much less accomplished answering the “should” question.

Consumers today crowd-source knowledge – picking up diverse pieces of information from a variety of sources then molding it into opinions and beliefs based on their values. Sharing scientific and economic information may inform, but has little impact on peoples’ feelings and beliefs. Values aren’t based in fact—they’re grounded in firmly held beliefs. The gateway to building trust is demonstrating you share your stakeholders’ values.

People should not take this to mean science and data aren’t important because they are critical to proving claims and supporting conclusions. But, our research findings do mean that we aren’t given permission to introduce science and facts until we’ve demonstrated we share the values of stakeholders who are interested in the issue.

In fact, simply sharing facts with someone who has conflicting beliefs actually galvanizes their position and makes it harder to find common ground. The debate over climate change is a good example. Regardless which viewpoint they hold, everybody claims science is on their side. Both sides of the argument are deeply entrenched in a highly-politicized posture, unwilling to give ground and viewing each round of new data as either proof that their side is right, or that “fake news” is conspiring to undermine their position. Common ground is nowhere to be found. The growing polarization we see on all matters politic make it increasingly difficult to have meaningful and productive discourse on important issues like agriculture’s impact on the environment, the relationship between diet and health, or the need to grow more and better food using fewer natural resources.

Theodore Roosevelt had this very astute observation: “No one cares how much you know, until they know how much you care.” The journey to building trust starts by identifying and then connecting with shared values.

My new book, Size Matters: Why We Love to Hate Big Food discusses in detail the path to earning consumer trust. To read more about growing trust in the food system, the book is available at Amazon.com.