The Martian Book Review: What I learned about growing food from a space story

What’s the first thing you do when you are left for dead on Mars and have to figure out how to survive for three years?

“The Martian” astronaut Mark Watney set to work on the most critical thing he could do to sustain life alone on a planet. He built a farm and grew food.

The best-selling book and movie “The Martian” is a compelling fictional story. I listened to the audiobook on my daily commute to and from the Look East office. The entertaining tale of persevering against adversity also gave me a new perspective on our work in food and agriculture.

What “The Martian” taught me about food:

Food is fundamental to life. Obviously. But it’s easy to forget when food is available at every corner gas station. The Mars space mission included a bag of potatoes so the astronauts could enjoy a traditional Thanksgiving meal. Watney added nutrients to Martian soil and cultivated the potatoes to grow in it. Nothing else he did on the planet was as important as getting that crop harvested, reminding me that while I can take the work of farmers for granted, it is impossible to live without them.

Sustainability is serious science. The atmosphere on Mars is much thinner than Earth’s and Watney only had the amount of water that NASA sent with the mission, so he was hypervigilant about managing these resources. As he so eloquently put it, “In the face of overwhelming odds, I’m left with only one option. I’m going to have to science the *** out of this.” Sustaining life on another planet may one day be a viable option and even here on earth, ingenuity can help us make the most of limited resources. 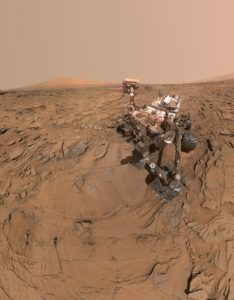 Survival takes creativity. Late in the book, Watney used the stars to navigate across Mars to reach a rocket ship. He remarked how it was a strange combination of ancient techniques and new technology. Agriculture is like that. Genetically engineered seeds, satellite-guided tractors and DNA profiling of animals are all part of growing food today. Yet it still takes soil, water and sunlight to grow a plant. The character Watney was a botanist from Chicago, but I think a farm kid would have developed many of the skills needed to survive on Mars.

Even though “The Martian” was fictional, NASA believes it is possible for plants to grow on Mars. Astronauts on the space station grew and ate lettuce. No matter where humans live, the ancient and high-tech art of growing food is something we all have in common.

Getting the right digital insights